Not your average love story 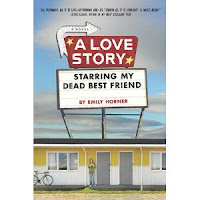 This is one of those books that reminds me why I love reading. I fell for this book early on, and held my breath that it would keep delivering all the way to the end. It did.

Emily Horner's YA novel, A Love Story Starring My Dead Best Friend, is about a girl whose best friend dies suddenly. (I'll note here, just to acknowledge it and get it out of the way, one of the weird coincidences that writers find all the time: there's a girl in the book named Julia who dies in a car accident--elements it has in common with The Secret Year, but that's not why I liked this book). Anyway, the main character decides to bicycle from Chicago to California, the way she'd planned to do with her friend, but her trip doesn't go as intended. Meanwhile, her once-upon-a-time worst enemy is back in her life, and she's trying to find her place among a group of friends who were closer to her late friend than they were to her.

Emily Horner handles this story so beautifully: the painful moments and the joyful ones, the scenes in which people hurt one another and the scenes in which they come through for one another. There's a subtlety and a depth in the prose. The dynamic between Cassie (the main character) and Oliver (Julia's boyfriend) is especially interesting, and it's a relationship I haven't seen much in books: two people bonded by love and grief for the same person, yet also rough-edged and competitive at times because of that very love and grief. I also liked that the enemy who becomes something else, Heather, doesn't do an unbelievable about-face into saccharine goodness. Finally, I liked that so many turns of the plot caught me by surprise, and deviated from the well-worn paths of storytelling. Horner uses a pattern that will be familiar to readers of Jennifer Bradbury's Shift: chapters alternating between the present and the near past. But as Bradbury did, she manages to keep both plotlines taut.

And did I mention there's a musical in it called Totally Sweet Ninja Death Squad?

source of recommended read: borrowed author's ARC, but now I seriously want to buy my own copy
Posted by Jennifer R. Hubbard at 8:29 PM

Jennifer R. Hubbard
I am a writer. My most recent book is LONER IN THE GARRET: A WRITER'S COMPANION. I've also written the novels THE SECRET YEAR, TRY NOT TO BREATHE, and UNTIL IT HURTS TO STOP.

Loner in the Garret: A Writer's Companion

Until It Hurts to Stop

Try Not to Breathe